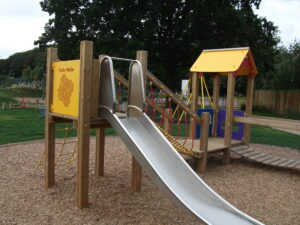 For many years the Recreation Ground play area suffered from a lack of investment and much of the play equipment provided appeared stale and tired.

The possibility of grant funding in 2009 from the County Council through the Play Pathfinder Scheme provided an incentive for a play area project group to be formed under the leadership of Neil Davies supported by Edd Stonham and Brian Ing.

Extensive consultations then took place with children and parents on the type of play experiences and equipment they would like to see in a redeveloped play area for children and young people aged between 4 and 13.

A play area plan was produced together with a business plan and the quality of the application presented resulted in the highest grant being awarded in the County of £45,000

The cost of the project of over £100,000 was funded by Histon & Impington Parish Councils, the Play Pathfinder Scheme, Donarbon Community Fund, Histon Feast and community fundraising by Friends of Histon & Impington Recreation Ground.

Jean Adamson the author of the Topsy & Tim children’s books did the honours of officially opening the play area supported by Histon and Impington Junior School Choir in June 2010.